In an ideal world, I’d write a play and it would be put on and people would show up and you could just afford to let the work speak for itself. But the machinery of theatre hustle needs oil so here are some words on my new play Taboo and maybe you’ll read them and consider coming to see it.

Taboo is about the first date between a boy and a girl. Their names are Lily and Tom. Lily doesn’t get out much. Tom finds it hard to meet people. They don’t know each other very well but that’s what a date is for, right? You get to know someone a little bit better. The play unfolds in real time over a three-course meal. They chat. They eat. And then the rest of the story plays out and I'll say nowt.

What’s it about? It’s a dark comedy about dating in a roundabout way. It’s also about loneliness in all its forms: social exclusion, fear of dying alone, incompatibility, as well as having trouble connecting to people. In a world where more of our interactions take place online (including dating) I thought it would be interesting to look at two people trying to connect in a very traditional way.

The title, and indeed, the germ of the idea came from Lisa Fox and we developed it for Collaborations in 2014. It was a 20 minute one woman piece about a girl nervously preparing for a date. I pretty much just creeped on the audience watching it and the reaction was interesting. Some audience members were silent, maybe a bit shocked, but there was a sense of discomfort that was punctured by the ones who were laughing loudl. It was split down the middle. And that’s kind of what we were hoping for. Some people not getting why other people find something funny or conversely people not understanding why other people wouldn’t find it funny. This schism is the play itself in a nutshell and the relationship between the characters. Connection isn't an easy thing to find.

The real time chat, for me, was one of the challenges of this play. I’ve never written anything that unfolds in real time so I got to scratch that itch. It’s a lot more challenging than I had expected. Particularly when you include a full three course meal. I didn’t make it too easy on Sarah Baxter, our wonderful director, who has risen to the challenge impeccably and made a story about two people sitting down and eating even more dynamic and layered than I ever imagined when I was writing it.

I’m acting in it alongside the aforementioned Lisa Fox, who has brilliantly cooked her role over the last two years and I’m very excited to be bringing it to the stage. There’s a fantastic team working on it and it’s been ably supported throughout its development by White Label, Rough Magic and DCC who have been a great help.

It feels like I’ve said more enough about the play now and I hope my ramblings here have given you a taster and persuade you to indulge in the full three courses. Speaking of tasters, here's an interview we did with RTÉ Arena about the show. Buy a ticket and ideally, go for a meal beforehand. It’s good to get in the spirit of things.

Taboo plays The New Theatre from February 15th to 27th at 7.30pm nightly. You can book tickets right here. 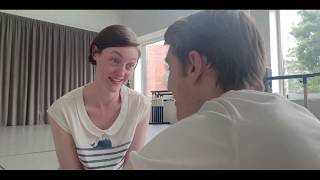